Alittle of this and that going on

I know it's been a little bit since I've wrote anything.Hubstead had time off and he wanted to go here and there,do this and that.I was glad when he went back to work.We(both him and I) are trying to quit smoking,yes it's nasty I know.We decided to try the Blu e-cigarettes and really they are good.I am a little harder on my will power but am working on it.

I have a friend over on Facebook who is related down the road and over the hill to me,yes Wanda I'm talking about you lol,but she talked to my auntie and I had asked her to ask auntie about my grandmother.We have always heard stories about grandmother being Indian. So she ask for me(thankyou again) and auntie said we were Cherokee.When you get alot of family members telling the same story of your heritage ,it gets you to thinking.I had an older brother who said when grandma got mad she would fuss in "the language" so they couldn't understand what she was saying and she had a temper,I can believe this.Grandma used to go down to the courthouse and talk to the local indians there and speak the language with them,mmmm.My other uncle said we were Cherokee too.I have done research and everything I have turned up was this,with all these stories,most of my family refused to register with the Nation.Why? In the time frame of our history most of them married a white man to keep from being taken to Oklahoma to the reservation.This is why I can not find any family on the rolls,I've looked really hard.But I am not disappointed. 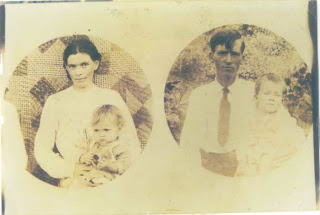 This is a favorite picture of my grandmother and grandfather when they were very young.Even with the black and white,her eyes were very dark.I have three sets of pictures of her and grandfather.This set,another when they were in their middle years and then when they were older.On grandfathers' side,I have a brick wall on someone who we think she was Cherokee too.Alot of times in genealogy when some has a name change or given a christain name,that usually means they were indian.So I have it on both sides.I still have alot left to do even though I have most of the information done.I go back on some of the genealogy sites to see if anyone has added anything from time to time.


I put on a crock pot of butter beans this morning with a ham bone.I haven't had these in ages and have been wanting some for a while.I'll get ragged about it from hubstead,he hates beans like these lol! I tried again to eat some steamed brussel sprouts the other night,I guess it just wasn't meant to be.I hurt so bad later.I can eat brocolli and cabbage,why not brussel sprouts? I making a big pan of cornbread later to go with my beans,it's a southern thing.

I just wanted to add a few lines about what's up and that has been about it.I've been doing some puzzles online to keep my mind going.Doing some reading. Thats about it.So have a great day today!

Posted by Misty Pines Homestead at 3:31 AM