Lookie what I got! 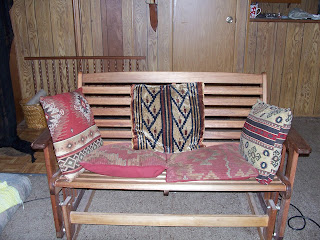 Trying to go smaller here.A friend of hubsteads called this weekend and asked if we wanted these.I didn't know it but hubstead had already talked to him about the rocker for my birthday.How cool was that? I have waited and waited for a rocking chair and finally got one!It's dang near brand new.($5.00 for both) The bench seat was included.Now some suggestions for cushions would be most welcome for the bench seat.Orion didn't like the idea of us taking his couch out and he can't jump up on the bench seat cause it rocks back and forth.The first thing he wanted to do was pull the pillows off and we got on to him about it.So he's been sulking some about it.We saved two cushions from the couch for him to lay on but he has been laying on the bed so I guess he figures we took his,he's gonna take ours!Rotten hound.Now we got to get started on the bedroom.I got all my kitchen stuff in and where we live there is a swap meet page on Facebook.I have already picked up a shelf from there.

Recently I went down to one of our grocery stores and picked up some sweet potatoes.I can't remember the last time I had some,besides the pies,but I was amazed at how small they were.I was thinking gosh is the produce getting smaller too.I also got some avacadoes and yuck they were too ripe.So now I have to look around for better produce.What is going on here? I can see why people are growing their own.I got two tomatoes too and for some reason,maybe mind wise?,I could taste the pesticide in it.So in the garbage it went too along with the avacadoes.I think the only things I have found here that was good is the local honey,tomatoes grown from the local farmers.That's pretty skimpy uh?


Orion is starting to shed which is our sign that spring is here.It's gonna be bad too.I constantly have to vaccum when he does because he has that soft under fur and I have gray and black tuffs all over the place.I can make another dog out of what he sheds.We have been keeping him outside more which he prefers any way but living here I have to watch for kids aggravating him.We don't let him out before eight in the morning and we bring him in before three in the afternoon.Got two kids that will tease him if we don't.And people wonder why he don't like children.That also goes for the utility guys too that check the meters in the alley.He has never been social with people.And living here I didn't want him to be with hubstead working nights.He is a great watch dog but he barks at everything.

I went ahead and planted some cactus seeds,well they are coming up but I don't think they will live.I have no idea what they are either,it was a mixed pack of seeds.So today I guess I will try to replant what I have and wait and see.Yeah Texas needs more cactus uh?Oh well that's what has been going on here.Everyone have a great hump day!

Posted by Misty Pines Homestead at 12:41 AM