Will I miss Texas?

Yeah I think I will.A lot of my family has always migrated here from back east and spent time here.I love the open skies and the mesas.The air seems so much cleaner.I won't miss the heat though,I never thought air could be so hot.I have spent time in Arizona before and it was hot there but Texas? Well before someone gets an idea of the state,let me tell you,the heat will absolutely dry your skin out and take alot of water out of you.And yet the humidity in the southern states will kill ya too.I don't know which is worse.But all said I do like it here,where we are everything is nearby and convient.I do get scared of the storms cause we get some good ones.I've watched a tornado form near here while I was looking out the livingroom window,it skipped over Abilene and killed a guy east of here.The snow is something else but as long as you don't have to get out in it.And it don't really snow here that often.But it is cold!

My neighbors are devastated cause we are very quiet and they said they will probably get somebody loud next.We got an oil boom going on and most the people here are oil workers.I told them hopefully not.I know their dogs are gonna miss Orion.They run the fence and just bark at each other and have so much fun.Once we get home,Orion is not going to know what to do.He's gonna have to find something to start barking at LOL.

So lets see:
Won't miss the high electric bills
water bills
loud noises from the base
train tracks
people screeching their tires
party noises and loud stereos
cars with the boom boxes
the race track with the motorcycles
rattlesnakes and scorpions
everything being expensive

Will miss the open sky
fresh air
the windmills on the mesas
my H.E.B. store(that to cry for)
all the nice people we have met


So yeah we're ready to leave and I know I keep saying that.It's almost like I'm trying to convience myself and I guess I am.I said I'd never move back east but after much looking at land prices and all the states I looked at about rules and regulations,Alabama was still the best choice.After all its country living I was looking for.I also think that the older you get you want to be closer to your family,maybe that's me but I do miss my brother and sister-in-law.They miss us too.O.K. enough of that or I'll start crying again.

And I was reminded by my cousin that we'll have to put up with critters of all sorts,yellow jackets and hornets,poison ivy and oak,snakes of several varieties,clearing brush and trees.If I could would of reached thru the phone and strangled him LOL But that's ok nothing that I haven't done already.I told him yeah but I got you to help with some it. 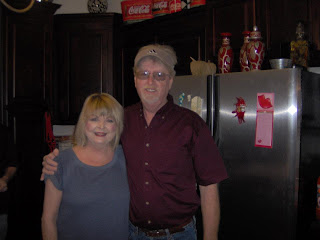 he a nutjob! but gotta love him. 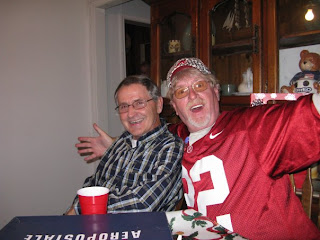 My beautiful niece and her family.She had to go have that stomache thing put in to lose weight and she has done so good from it and she looks so much better.


My brother and sister-in-law(they would probably croak if they knew I posted this pic)they were going out to a halloween party. 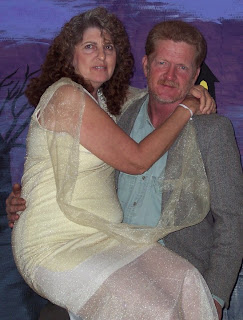 Posted by Misty Pines Homestead at 3:10 AM