You can go over to mistypines.blogspot.com for my new site.
Posted by Misty Pines Homestead at 7:34 AM 1 comment:

We finally got settled in. We have so much work with this place ahead of us.Orion didn't like it at first but he has become a porch dog. We've cleaned up the yard and I have gotten the garden going, cleaned some of the inside of the house and just trying to figure out where everything belongs.
Posted by Misty Pines Homestead at 7:10 PM No comments:

Hey everyone I'm back and so happy. Have gotten moved in and will post all about it soon.  BIG squeal!!!'

Posted by Misty Pines Homestead at 7:20 PM No comments:

Well I shut my Facebook down for now and trying to spend some time on here before we shut it down. I'm calling the local cable company over there to see what kind of internet service we can get. I really need to be online because I do some shopping and genealogy. It may be a month if I do get hooked up. So I won't be gone too long. But I hope they don't charge a arm and a leg. Hubstead likes to be online too.

Once we get going,I'm going to put my tabletop computer in the kitchen for cooking.I managed to get a lot of recipes from some online sites and have tried a few.I don't know yet how big my kitchen will be but so far I may have enough room to fix it up really good. We are not going to have enough room for all my fixer up projects to go in the uhaul so gonna have to do some selling this week and getting rid of a lot of stuff.I don't mind,I talked to my sister-in-law and she is going to take me down to a place with discount furniture. She already has a bead on me another washing machine and livingroom suite lol. Well not much now but I'm going to go ahead and sign off.I hope to write more and post some pictures. Just leave a comment and I'll WILL get back to you soon.Hope to have something for all of you next month.
Posted by Misty Pines Homestead at 9:47 PM 1 comment:

On a Rant Here about SALT

A few years back,I switched from regular salt to sea salt.I am not a salt person and less of pepper too.But nothing makes me madder than going to a nice restaurant and can barely eat the food because it taste too salty.We went to a local place here and it served Mexican food.We were saying goodbye to some friends. The food wasn't bad when they brought it out,you couldn't really taste the salt then but we brought home some and heated it up and it tasted like pure salt.Geesh!

When I cook,I have learned how to use herbs and spices instead of using salt. I do slide some pepper in sometimes but I can't eat food with too much of it.Ha ha hubstead just came in and said the same thing,he's eating his portion and he said it tasted like someone just poured it on there.He is one who has to salt everything HA!It breaks my heart to see him salt his food but I don't say nothing for the sake of an argument. 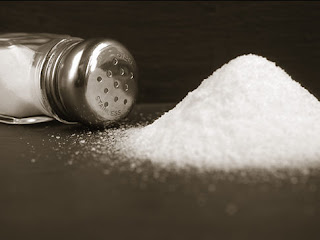 When I switched from regular salt to sea salt,it made a big difference in how the food tasted and how we felt.I learned how much to put in food. So if you're on regular try sea salt for awhile.I know I don't swell up as much or feel squishy.
I'll be paying for this tomorrow.

Sea salt is produced through evaporation of ocean water or water from saltwater lakes, usually with little processing. Depending on the water source, this leaves behind certain trace minerals and elements. The minerals add flavor and color to sea salt, which also comes in a variety of coarseness levels.

By weight, sea salt and table salt contain the same amount of sodium.

Regardless of which type of salt you prefer, limit total sodium to less than 2,300 milligrams a day — or 1,500 milligrams if you:
Are 51 or older
Are black
Have high blood pressure, diabetes or chronic kidney disease


Yeah I like sea salt a lot better.This may have been not too much of a rant but it still ticks me off when restaurants take perfectly good food and ruin it.Most food served is prepackaged I imagine and the salt is a preservative but dang man ease up.It's probably a good thing we don't eat out that much.
Posted by Misty Pines Homestead at 1:25 AM 2 comments:

Ok I couldn't wait, I posted the picture on here. I love my porch and have a wonderful wooden bench to put there. I know my house plants will love it. I got my avocado tree started and it's going on the porch too. It's been raining there quite abit, the humidity, will be nice for them not including all the rain water for them. The tree line in the back looks close but we have a nice size back yard to fence in. Hubstead wants to keep the color on the outside the same,he said it looks more like a cabin sort of. Any suggestions on landscaping would be nice.I have some ideas but not until we get there. He's also looked at the fruit trees in the garden books to see what kind he wants lol. I think we may have some muscadine vines around there too. If we do oh boy how about some wine! Someone planted some gladiolus flowers there off to the side by the woods and I got some seeds already. I have some dark red hollyhocks to grow and a lot of daisy type flower seeds. Some marigolds and herbs.Just to give you an idea. I'd like to plant some roses too. We're going to plant blueberries and raspberries and a fig tree.


Whatcha think? I'd love some input.And yes we have to throw some grass seeds out there. I have no green front yard just dirt.
Posted by Misty Pines Homestead at 2:25 AM 2 comments:

Last night I think it sank in we were really moving back home.Wow.I have the picture of the house(that's what I call it)as a screen saver.Along with all the google earth pictures I looked at,I could actually see where I want to put stuff.

Now let me explain this groove thing. You know how you get lost in life? When you're younger you have all these dreams of seeing where you want to be(that's me anyway),and as you go thru life you find yourself on the 'roller coaster" and you just want to get off. When you do you don't know what to do or much less how to do. You have a tendency to muddle thru each day and you're still wandering not only in body but in soul too? You've lost your groove in life. You wonder when you will get it back if ever. When I want to get mine going, I put on some music that reminds me of a time I was in that state of mind. Well I have done that and I found my beat ,my music that's deep inside. My dance,my moves.I'm 53 and can still feel the happiness inside. We don't lose ourselves,we just have a bad habit of putting it on the backburner.I decided I'm tired of that. How you find your groove,your music,your inspiration,your moves,listen to your heart sometimes. Tell your head to shut up. Find that one thing that turns you on and turn up the volume! Feel silly expressing yourself?,don't be.If you look around you see people doing so many positive things with their life. I was raised in the 60s that should tell you something. But I wasn't raised in a hippie fashion,my parents were very strick. When I left home I went wandering all over this nation and seen some really strange things but I also saw people who were very charismatic,very open about how they should live their life. I have always wanted my home to express how I live.That's why I have been setting up a certain look that will keep me calm and relaxed. I've earned it.That is the kind of person I want to be who I should be.Someone told me long time ago,they said I was mean.I didn't think so but now looking back I was but didn't realize it.I was stressed out and mentally screwed up.And no matter how much I tried I stayed that way.Yes I tried meditation and yoga and all the other stuff but I still could not get into "that" frame of mind.Now I think I can.


I'm still going to see my shrink when I get home and see a regular doctor. I have to but I feel I can handle things better. I also think I may have been looking in the wrong place here.I thought being out here would ease some of my problems. It hasn't. I need to be in my atmosphere my kind of settings.I'm lost here. I'm a woodsy type of gal. I like the country settings,that's me. We all need to be quiet inside ourselves sometimes.

I can see if any of this does or doesn't make sense I'm just in a different frame of mind tonight and wanted to get it out.

Posted by Misty Pines Homestead at 1:20 AM No comments: