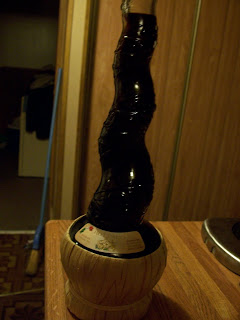 I bought this today.It's a bottle of red wine.I'm planning on using it in the kitchen when I cook or maybe when my nerves get frazzled,I haven't decided yet.Depends on which comes first.

When I go out I really try to find the unusual. I see what I want in my head then try to go from there.I won't be able to get much for my kitchen because it's going to be small but I want it to have an impact on the rest of the house.We decided on as much rustic as possible.So getting some things here will be great.We have some antique stores that carry the tubs that are on lions feet.I have always wanted one.They're deep and you can just soak in them.Don't know yet on that item.They also have some old cabinets with the windows I thought would be cute and old diningroom tables and chairs.My poor brain has been in overdrive in the last few months and it's getting even hard to sleep.I lay there and think of all the things I can do with the cabin lol.But's that o.k. I am entitled I think!

Well anyhoo I called the cabin place and they told me I would have to be there in person to sign the paperwork and then they would order the cabin for me. I told them I had wanted the cabin to be there before we got there so we could at least have a roof over our heads(it's still going to be cold there in March),so I asked her if she could send us the paperwork and I could sign it here and send it with the money back to her,she said she would have to ask because they usually don't do that. If we can't that means either we will be doing some camping out for two weeks or I have been asking my relatives if they knew someone with a camper we could rent.Why not stay at my brothers?No Orion would not be allowed in the house and they have a bad coyote problem there.He is not an outside dog.And I'm not giving him up for no one,not this time.

So we will see how it goes.