Well I'm not surprised about this. I have been looking for land in Texas and Alabama and wouldn't you know it,land is going up cause people want to live off grid and these real estate people know it.

Anytime there is a movement or trend(which I don't think it is)somebody has to jump on the bandwagon and throw a friggin monkey wrench in the works.Now I haven't found anything yet but the prices seem to be going up .Some sites are ok but with the recent wildfires in New Mexico and Colorado I wonder whats going to happen to those peoples'
property?I hope they all are alright . Are they going to try to rebuild or move? Are they afraid it will happen again? Texas has wildfire,we had one year before last right in back of the park but Abilene got it put out fast.So I don't know what is going to happen but I would really like to get something soon and at least by the end of the year. No I don't believe in the end of the world stuff either its just we'll have alot more to work with.


I got my egg cartons started. I'm saving whatever I can.wheres them chickens?LOL

For Leigh-I mixed lemon and water in a spray bottle and sprayed my dogs hot spots and he stopped chewing on himself back by his tail. it works great, and it took some of his smell out. See my pup is half lab/wolf and boy sometimes he stinks. So in between baths I spray him with the lemon water and he smells alot better and it cools him off.

I made my bread and hubby may eat it if he had a choice but he is more of a store type guy.Thats ok he'll learn lol. Its funny how you get so used to something but over the years I've incorporated different things and broke some habits.That's what it takes. Do something you are not used to for awhile then it will become normal.

I ordered some flax seeds and quinoa and they haven't come in yet but soon. I have always wanted to cook with this stuff .The recipes look so good. I also ordered some more beads so I can get back to doing my beadwork. I stay on the computer too much here lately but I ran out of beads and had to wait.So I got some coming so I can finish some stuff and make more stuff. I used to sell on ebay which was great for 5 years and of course they upped the price of the store and I couldn't keep it. But if it comes down to it I can always fine someone who likes beadwork. 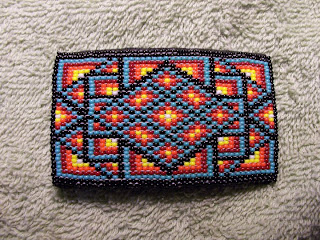 This is a belt buckle I made hubby. I got another one I need to post but I'll do that later.I taught myself how to bead and do leatherwork. I'm not into custom work or stamping but I like just plain stuff. It's a sit down job lol.

Well that's about it for today can't think of anything else. It's nice and sunny and hot outside and my tomatoes haven't given me any yet.


Posted by Misty Pines Homestead at 9:43 AM