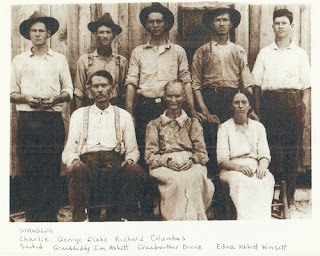 I spent 15 years doing my family history.Most of my family members were from Ireland and Scotland. When they came here to America they became farmers. Migrate farmers to be exact. They traveled all over til they settled in Alabama and raised their families.Here is my great Grandfather and Grandmother with their brood. Some how some where I always liked growing things.Now I know why.My Grandfather used to have an old mule that us kids were not allowed to get near. He was hornery and old.And they were afraid we would step in the doo.

They lived in an old wooden house with a coal burning pot belly stove.I can remember the smell.Grandma used to make biscuits and she always made the small ones,Grandpa would get mad because he said that's not a biscuit.He ended up making his own biscuits and they were huge! Grandpa used to do wood work and he used alot of cedar.The smell was so great,you could smell cedar all thru their house.We weren't allowed in the workshop because they didn't want us to get cut with all the sharp saws he used.

Grandma had a plum tree in her yard and we would sneak and get the plums off the tree. She would just hollar at us and threatened to whoop us if we did it again.Those were good times at my Grandparents and I just wanted to share it with everyone.Oh and they had the best water from the well and it was so cold!That was before all the construction messed up the underground springs.:(

Now since they are gone but not forgotten the place where the house stood is nothing but a field.But I would love to go there and buy it and put my own place there. Alabama has some expensive land prices and unfortunately that area is too much.I love the area,northwest corner and it has some very beautiful scenery and lots of trees and sloping land. The soil would be excellent for growing a garden. Well I can dream!
Posted by Misty Pines Homestead at 8:48 AM