We had given alot of thought about buying something new for Orion to wear this winter.He has a thick collar of hair around his neck,usually means we are going to have a cold winter I was told,well heck!But anyway,he has never been one to walk around without a leash,yes,he will take off like a rocket,something we have never been able to break him of,so in order to keep him in check we have always put a dog collar on him.I noticed he has a hard time because he pulls me a little too hard,hubstead says he has no problem with him(go figure)so I suggested about getting him a harness to put on.

Well we bought one for him last night and he don't like it.It's going to have to be something for him to get use to.Hubstead put it on him and adjusted it to fit him and we let him go.It makes him walk funny because of the straps that go under his legs.I started laughing at him and he got so insulted and gave me the evil eye.He tried to chew on it and we scolded him about it,which he gave both of us his full evil eyes.So today he gets to wear it for awhile,yeah this is gonna go over well.I'm not going to sleep anytime soon while he is wearing it. 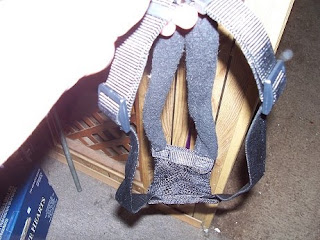 This is really a nice harness with a stretchy mesh front to it.I just hope it holds up to his weight.He's a really strong animal and he can just about pull your arm out of the socket if he wants to run.So we will see.I would show it on him but unfortunately the harness is jet black and so is he,it would be hard to see.But the walking is hilarious!

We also went and got stuff for our Thanksgiving meal.I bought some can green beans(so sad)but a friend told me to wash the beans real good and then add the seasoning and they taste better,they do it works,been doing it for years.I have all my stuff and some pumpkin for my pies.This year I think I am going to try to make my own pie crust.Some of you have posted some good recipes for homemade pie crust so I'm gonna give a twirl.We got a twenty pound bird.We used to smoke our bird in the smoker but here there is so much wind it doesn't work.Year before last,yep,food poisoning.Another story.But we have been cooking it in the oven since then.Even if it's the two of for Thanksgiving it's the one holiday that I go all out and cook on.Christmas not so much.We were talking about a smokehouse and hubstead wants to build one YAH! A lot of people don't like smoke meat but it's a great way to preserve it.Hubbys people in Kentucky had a smokehouse and he said he wished he could of gotten the big meat hooks before they sold the house.That house was a self substaining piece of work.It had a well,his uncle always had a HUGE garden,livestock,the whole nine yards and it was an old two story house.His aunts were actually born in the house.It sits next to the Cyrus house and yes he knows Billy Ray.I'll download a picture of it.The smokehouse sat right out back from the backdoor which at that time was convient.It has a wonderful maple tree in the front yard that is so big and so pretty when the leaves turned,apple trees in the backyard and more maples.A little about hubstead here lol.

We picked up(I say we because if one goes some wheres usually we are together)some other kitchen gadgets.He found a good whisk to work with,he likes to cook too when he gets in the mood,and I needed a timer because I forget sometimes when something is cooking duh me!We also got a new roasting pan for the turkey with the forks to pick it up.Tomorrow is stove cleaning day top and inside and out.I know,you don't feel sorry for me,I don't either it needs it.

Well this is the last winter we are going to be here.Next years holidays are going to different.I told hubstead I wanted a real tree next year for Christmas and I wanted to make my own ornaments for it.Hopefully by then we will be eating deer meat and fresh veggies!